Welcome to Spreadable Episode 005! In this Spreadable we give you a little round-up of our week at the MAPDA awards and conference in Melbourne as well as a sneak peek behind the processes of a couple of our projects that have previously won MAPDAs. 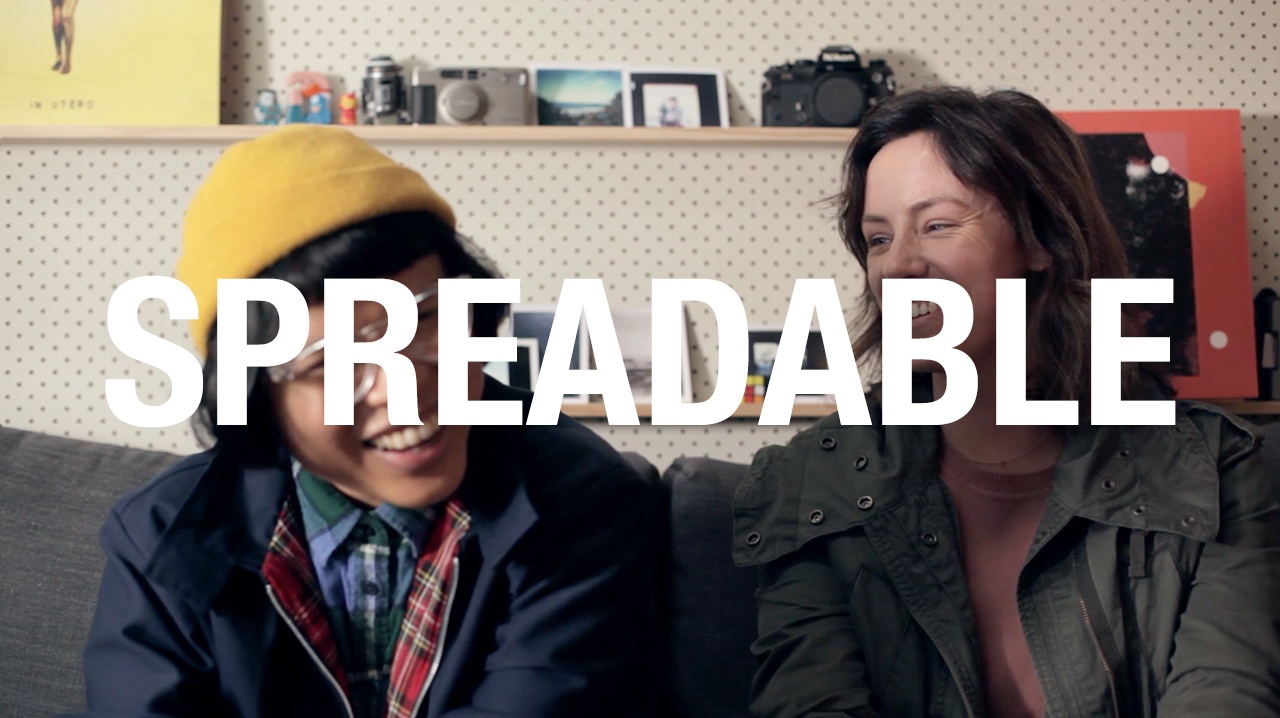 Where we are diving into some of our MAPDA award winning projects and our week in Melbourne for the 2018 MAPDA awards and conference. Watch our video above, or read our transcript below, enjoy!

HELEN: It is a bit bright.

SARA: Look at my teeth.

HELEN: Mmm, because I was born on the fifth.

HELEN: Not that I’m superstitious or anything.

SARA: Mmm. So you’ve got Helen and I today, Luke is out of the country at the moment. So we are taking over the hot seat position.

SARA: Don’t know what to call it.

SARA: The MAPDA awards are um, an awards night which is in the galleries and Museum sector for Australia and New Zealand, so we’ve actually been lucky now to have won 23. So we want to take you through a few of those

projects. Um, and we’re going to be talking with, um, different people who have worked on those projects. So we'll be talking to Sarah Cook, Ben, James, and Helen for somethings and I’m going to touch on a few of the projects as well. And then we’ll wrap up the episode with a little bit about what the conference and that week in Melbourne was like.

SARAH: So the Lock-Up is one of Newcastle’s leading contemporary art spaces. Um, it originally, was an 1800s police station, and had been operating as a museum for a while but about five years ago, the Lock-Up came to us with a vision to relaunch as a contemporary art space. And this was big, this was ambitious, this was a first for Newcastle, and we really wanted to bring to the table a brand that packed a lot of punch to match their idea. We did up a A3 poster which folds down into a little pocket sized piece that can be distributed throughout cafes and interesting places in Newcastle and the way that we tackled that was to print the artwork in black and white, and fill the paper with the art, so it becomes a bit of a little sneak peak into what the real bigger, larger exhibition will be like. Then the logo is put on over the top, in this really punchy fluro orange, which is very iconic for the Lock-Up. Headjam and the Lock-Up were lucky enough to be nominated for a whole range of MAPDA awards. We were successful in winning both video and the website which was very, uh, ground-breaking at the time. That was really successful and yeah, it was a really proud collaboration to have worked on.

SARA: This is Not Art, or known as TiNA, is an emerging arts festival that’s hosted every year in Newcastle. It’s been going for over twenty years now. So the brand that we created for TiNA is a little bit arty, it’s a little bit stripped back, we really wanted to let the emerging artists, which are the people that are performing at the festival, to really be the heroes of this piece, though we wanted to let the flavor sing and have that backed up with a strong logo, that could adapt and fit all kinds of styles. We took that flavor of experimental art and really put that into the video work. In contrast, the app had to be a lot more stripped back, it had a lot more practical considerations.

BEN: Uh, the TiNA was a fun app to work with because we were using a lot of data for events all over Newcastle. I think the biggest challenge would have been getting a dozen different venues all working and mapped out correctly on the Google Maps that we were displaying inside the app. So what we did is basically we created all the event data, which included, uh, location, content, and then we had to all map those first to the venues they were being held at with a bit of information about the venue, and then place all those venue on the map. But the thing that was the most fun to develop was getting all that data working in relation to where the user currently was, so they could, while they were in the middle of the festival, walking around, look at their app and see how close they were to what other events were going on somewhere else.

HELEN: So I worked on the TiNA promo videos. One of which won a MAPDA, i think a year or so ago. And that particular video was one of the first project that I worked on here at Headjam. I think i was only with Headjam for a couple of week when I was given the brief and it was put on my desk, and they were like, challenge is very tiny budget, but here is a basic idea of what we think we’re going to do, which was pour goop over people and create these reaction shots. So I had a think about how we could potentially film this, we made a decision to try and see if we could do it in like 60 frames, some sort of like slow-mo situation, and I guess to like add an extra element of fun was to make it black and white, and make the only thing that was in colour the goop, which I thought was pretty cool when we finally got that all together in post. And then last year, we did a promo video for TiNA where we decided to create this blue kind of like mesh screen and have people make various shapes through the screen which I thought, like weren’t quite sure how this was gonna look in camera, although we had an idea and then when we got there on the day and did the shoot and looked at it in camera, it was absolutely magical. We were really loving that was probably one of my favourite shoots.

SARAH: The Newcastle Museum moved premises in 2010 to a new location and to coincide with this they briefed in a new brand and a new identity. A big part of the project that I remember was all of that being accessible, so it’s inviting people no matter who they are into the space, everyone is welcome. It’s about discovering new things and learning something different and connecting with people so we really had to look at a brand that was really accessible and friendly and we used colour and shape and, you know, a friendly kind of feel for that. Part of the campaign that we did was these photographs that really explored a new generation connecting with the history and the science and the objects that the museum uh, curated through their exhibitions. So as part of the ongoing work with Museum, we did the promotion for some of their bigger exhibitions, on one particular occasion we actually collaborated with them to do the earthquake exhibition, which was a 25 years on, a then and now of reconnecting and recreating with some of the people that were there in the 1989 Newcastle Earthquake. We did this by looking at uh, some of the old photos from the time and recreating those with beautiful portraits that Headjam shot and the curator of the Museum did a lot of work collecting the stories and really crafting a narrative of how Newcastle has been reshaped, and the personal experiences of the earthquake.

SARA: Late last year, Moree Plains Gallery became BAMM. So we got this project, this rebrand, and we knew it was going to be pretty radical, they were really ready to breath new life into the gallery. We came up with this pretty awesome bright new brand for Moree Plains Gallery, which is now called BAMM, the Bank Art Museum of Moree. When we visited Moree the gallery itself has a real grandees of presence so the brand needed to reflect that, and their team and their board were were really excited about this punchy new look the gallery was going to take on. And that fed into the website.

JAMES: So the interesting thing about the Bank Art Museum website was that it broke all the rules, we had a lot more space to play. So some of those things were the splash page, the full border on the website, which is something which is something that you won’t normally see on like a normal e-commerce website or even a business sort of site. The thing I liked most about this site was I was able to spend a lot of time on the animation section and yet again I got to play on this site a lot more than other sites because we were able to, um, incorporate that into the brand.

HELEN: Welcome back, we thought we’d um just give you a quick little round up on our week in Melbourne for the MAPDA conference and awards. We arrived on Monday, basically to do the setup for our little booth. This was my first experience being a booth babe. We, uh, had everything flat-packed and ready to go when we got in there, and put our high-vis on and had to basically make sure our space looked inviting.

SARA: Yeah, so basically we wanted to get in front of people who were in the Museum and Art Gallery sector. Uh, which we were able to do, which was awesome. This gave us an opportunity to get in front all of the, all of the capital cities, and across all the states. Really incredible group of people, so we got to engage in some really excellent conversations and got to talk to people about what we could possibly do for them and help them solve their problems or challenges that they were facing, um, within their sectors.

HELEN: I think what was quite interesting with our booth in comparison to the others is that we were offering quite a non-tangible service, so that was quite an interesting way to take on people coming in, because they weren’t really sure what we had to offer them at first, I think there was a bit of confusion.

HELEN: If only we did sell them, we would have made millions.

SARA: Awesome week in Melbourne, um, met some amazing people, had some really fabulous conversations, and got to sort of talk about really incredible projects that, oh my goodness, I really do hope we get to work on them, they sounded really cool.

HELEN: Will we do it again?

SARA: Hahaha Why do you keep asking?

SARA: I don’t know what the answer is. 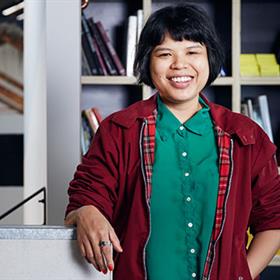